It’s so hard to believe it is January. 2013 – yikes, where did 2012 go? Reflecting on the last year, I was shocked at how much of a blur it’s all been.  It occurred to me that having baby numero 2 created more of a mommy fog than baby numero 1. Why? Well, with two boys racing around – time just doesn’t stand still.  I’m left in the dust behind two roadrunners.

Maybe it’s just me, but time seems to fly faster the more children I have.  It didn’t seem to go as fast with just one child.  Bobby’s first year, my husband and I relocated to Sonoma.  I can vividly remember exploring the town with my then 6 month old Bobby, introducing him to music classes and story-time.  I did similar things in 2012 with CJ, but its such a blur.  maybe it’s that the visits to the parks have taken on a new persona, instead of sitting playing in sand or with leaves, it’s a more interactive experience – playing hide and seek, tag, freeze dance, and chasing after Bobby as he climbs trees or (to be honest) tries to run into oncoming traffic.Again, left in the dust.

The quandary becomes how to slow things down for 2013.  Over the holidays a friend and also a mom of 2 wrote a beautiful piece about slowing things down.  She vowed to create stillness in her life.  To enjoy, embrace and extol the simple moments. Through these moments like reading stories, singing songs, and playing games, she saw her kids shine.

After much reflection as to my own blurry 2012, I do think there is something to slowing things down.  For isn’t it in the everyday moments where we really see our children in a new way.  Letting them explore things thoroughly without the pressures of hurrying about to get to X, to accomplish Y, or to finish Z.  I’m starting to think so anyway. 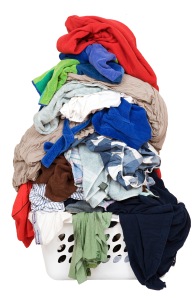 The other day when faced with piles of laundry to fold, I tried something new.  Rather than wait until my roadrunners were sleeping, I decided to pull out the laundry baskets and actively engage them in folding. Here’s what happened.  Bobby was thrilled to get to help.  CJ was happy to pull clothes out of the basket and then climb in it.  Rather than get frustrated about the mess and inefficiency of the process, I let it go, trying to enjoy the moment.  I focused on letting the kids just enjoy the process.  After all, did it really matter if it took a little longer to fold?  Or if a towel had to be folded 3 times?  What I learned about my boys in that hour couldn’t be replicated anyother way.

Don’t get me wrong, I won’t be making this laundry folding a daily activity.  Nor will I be slowing things down completely as it’s not in my nature.  But I will be carving out time and creating space to enjoy life in a pure and simple way.