There has been a lot of hype about the different ways to parent.  Not only does the discussion go significantly beyond spanking or not span 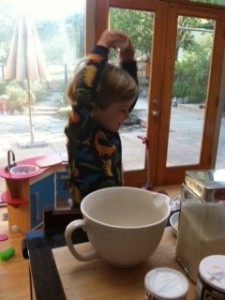 king, foreign cultures are being praised for their different, more intuitive approaches.  Now the question becomes does one subscribe to the Tiger Mom mentality, or the French, ‘Bringing up Bebe’ parenting style?   Before answering that, we should stop and ask what ever happened to the good old American Mom?

The book ‘Bringing up Bebe,’ by Pamela Druckerman, does offer much to think about.  By praising the laissez-faire style of French parenting, the book in essence criticizes American parenting styles, much in the same way as ‘Battle Hymn of the Tiger Mother’.

With stories lauding infants who sleep through the night by four months of age, children who dine patiently during multi-course meals, and kids who play independently at home while parents have adult time – the laid back parenting style supported by the book begins to sound attractive.

The thought of being able to sit down at a playground and have a conversation with a fellow mom rather than chasing after my little sprinter (who has been complimented by strangers for his speed) struck a chord.   After all, it would be nice to enjoy a bit of an adult life amidst the chaos of mommyhood.

Then, I read on.  As a foodie, I took to heart the discussion about how the French encourage children to eat a variety of foods.  Described as a “cultivating a child’s palate,” Druckerman gives examples of how the French diversify a child’s culinary tastes.   French children experience a variety of foods in not only their home but also school.  In fact, there are government meetings, Commission of Menus, during which time multicourse meals are charted out and scheduled.   For example, one meal would start with a salad of shredded red cabbage and yogurt, proceed with white fish with dill sauce with a side of potatoes, after which the children would enjoy brie cheese, and lastly, a baked apple for dessert–straight from the wish list of Jamie Oliver, and drastically different from the pizza and hot dogs we Americans are known for.

After reading about children who enjoy fish mousse, I started to become a convert.  It wasn’t until the end of the book where things got a little more interesting and, for this mama, the proffered parenting style became less attractive.

The role of praise within French parenting struck a dissonant chord.  According to Druckerman, French parents “don’t believe that praise is always good.  The French believe that kids feel confident when they’re able to do things for themselves, and do those things well.  After children have learned to talk, adults don’t praise them for saying just anything.”

Another approach was recently described by the Tiger Mom, Amy Chua, author of Battle Hymn of the Tiger Mother, who explains how children can develop  their own personal inner praise.  Basically by having children work hard to accomplish things, they develop an inner praise and confidence when they reach their goal.

Druckerman kindly jokes about how Americans praise the smallest things like kids jumping on trampolines.  Yes, I am guilty of cheering on Bobby as he jumps.  What is the harm? Arguably doing so will encourage children, i.e. Bobby, to do things purely for praise.

This is compared against the French model where praise is intentionally withheld.  Praise is not only withheld by parents, but also doctors and teachers as well.  In fact, children are to expect criticism.  Now mind you, Druckerman throughout her book gives examples of French toddlers doing exceptional things.  She describes in detail a   three year old making yogurt cake entirely by herself  –  measuring ingredients, cracking eggs, and even filling muffin tins.

So why not praise the cake-making child for accomplishing these things?  By praising the little things are we really hindering more than helping our children?  But what is the alternative?  Acting indifferent to the cake making child, or criticizing the eggshell in the batter?

It would seem that actively withholding praise and promoting criticism would lead to having children work harder to seek approval.  And, it seems that some experts out there agree.  The Raising Children Network out of Australia is an impressive partnership of organizations addressed the issue by acknowledging parents who praise children “might be worried that [their] child will start needing the approval of others to feel good.”  According to the Raising Children Network such an approval response isn’t the case.  “

In fact, children who are criticized all the time are more likely to seek approval to feel good.”

From experience with my two-and-a-half-year-old, Bobby, I can say that that praise seems to be everything.   I can even see at his precious age how happy he is when he accomplishes something – when he pieces together a train track or whisks pancake batter, Bobby has a distinct smile.  Often he exclaims “I did it!”  With so much confidence, he tells the world about his triumph.  If I were to subscribe to the French view, then I would respond by acting disinterested or pointing out that the train track isn’t quite finished.

So, I had to ask myself, what is the real harm of praising his accomplishments? Where will this lead?  Or the converse, where will withholding praise lead?

Encouraging accomplishment whether it is putting away a toy or later getting good grades, would seem over time to encourage productive behavior.   Work hard and secure good results to obtain a reward.  This is a quintessential American philosophy, dating back to the Puritan culture that landed on Plymouth Rock.  Maybe this is why American workers have been found as being more productive than others internationally — This is after Japan’s productivity boom of the 1980s and the recent productivity surges by Chinese and Indian workers.

It turns out that praise is important in developing confident children.  In the Right Way To Praise Your Kids, Heather Hatfield, explains that “not giving enough praise can be just as damaging as giving too much.  Kids will feel like they’re not good enough, or that you don’t care, and may see no sense in reaching for their accomplishments.”

The question becomes what is the right amount of praise?  According to Hatfield, “Experts say that the quality of praise is more important than the quantity: if praise is sincere and genuine, and focused on the effort, not the outcome, you can give it as often as your child does something that warrants a verbal reward.”    The article goes on to list examples of ways to praise your kids.  Giving descriptive praise – praising the effort that went into the action is singularly the best way to praise your child.

It seems by praising specific efforts and actions, a parent can help their child cultivate an inner sense of confidence.  So, American mamas like me are on to something.  From now on, I will continue to praise Bobby’s accomplishments.  I’ll be more descriptive though –  be applauding Bobby’s determination in piecing those train tracks together, or the coordination and focus in whisking batter in a bowl.   And, even if it’s not on the same level as making a cake from scratch, I’ll let him share his triumphant smile with the world.